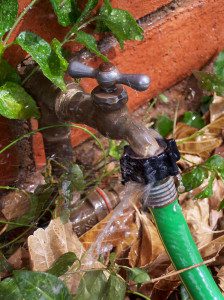 If you’ve poked through my previous postings, you’ll probably notice that I love using events when I program. If I can find a reason to use an event, I probably will. I think they’re a great tool that can really help you with designing your architectures, but there are certainly some common problems people run into when they use events. The one I want to address today has to do with memory leaks. That’s right. I said it. Memory leaks in your .NET application. Just because it’s a managed language doesn’t mean your code can’t be leaking memory! And now that I’ve got your attention, let’s see how events might be causing some leakage in your application.

(There is source that you can download and run. Check the summary section at the end!)

One of the most common ways to set up an EventHandler in C# is by having them defined for the entire scope of the instance. Consider for a moment the form designer in Visual Studio. When you double click on controls you get some handler created for the default event on that control. See how the EventHandler was declared though? You get a method declared that has a sender and some type of EventArgs. Pretty standard stuff here and there’s nothing ground-breaking about it. So what’s the problem with this method?

Well, there’s nothing wrong with it as long as you know how to clean up after yourself. Consider the following two classes:

The first class has an event that our second class can hook onto. You’ll notice in the second class that I’ve defined an instance-scope handler that we can hook up. This is the exact same syntax for declaring an event handler that you’d get from the form designer if you’re doing GUI programming.

The danger with this setup is that until you unhook the event, the object that hooks onto the event will not be freed. “Well, no problem!” is what you might be thinking. You know how to solve that. You can just unhook the event in the second class’s finalizer/deconstructor.

…Except that won’t work. The finalizer will not get called on the instance of the second class until the event has been unhooked! It’s a bit of a chicken-or-the-egg problem, but it makes sense. A finalizer will only be called when the reference is being cleaned up, but the instance can’t be marked for cleaning because something is still using its event handler. See why this can get a bit dangerous?

So this is an example of hooking events where you won’t get a leak. Why am I showing it? Well, in the next section I’ll make a small tweak to it which will make it behave just like the first scenario I described.

Let’s assume we have two classes again. I’ll use the first class from my first example (the object with the event) and this new class here that we’ll use to hook onto the event:

Notice the difference from the first example? I’ve hooked up an anonymous method (using a lambda expression) to our event instead of declaring an instance-scope event handler. It’s a small change, and for the most part, I might argue that this is just a stylistic thing. If you don’t ever plan on unhooking the event then it’s not such a big deal to go with anonymous methods, but if your method body grows pretty big the code can definitely get unsightly.

Anyway… sweet! We just hooked up to our event and we don’t have the scary leak situation that we did in the first scenario. How cool is that? Well…

The second method I described works great… until you go to put it into practice. It’s clearly not an impossible situation, but it’s pretty unlikely that you’ll write event handlers within an object that don’t use any of that object’s state (or even other methods on the object). Again, not impossible but just not the common use case. And since it’s not the common use case, you need to be concerned with the potentially problematic common use case 🙂

Let’s consider two classes (yes, again, two classes). We’ll use the first class I described above in both examples that has an event that we can hook onto, and a second class that looks similar to the class I introduced in the second example:

private void SomeInnocentLittleMethod()
{
Console.WriteLine("… Not so innocent after all!");
}
}
[/csharp]

See the difference compared to example 2? The event handler in this class calls an instance method. This would be a pretty common thing to do (unless you like to duplicate all of your code and not use methods ever :P) and it doesn’t look like it should cause problems. And really, it won’t if you understand the implications of hooking an event handler up to an event. So once you’re done handling your events, make sure you clean up and remove your handlers!

In my opinion, the really interesting part of this example is that the event handler is only calling an instance method. It’s not even using any variables or properties of the instance. Still, the .NET framework is going to hold onto this second instance until we unhook.

Well, hopefully I haven’t scared you away from using events. The take-away point here is that you need to be mindful of hooking up your events and when/where you unhook them. Personally, unless you always plan to have two objects exist for the same lifetime, I wouldn’t hook up events in the constructors like I’ve done in my examples. Some closing tips:

I’ve written up a little sample application that uses the example classes and walks you through the three examples I’ve outlined. All of them involve instantiating the classes, hooking up the events, and then how they behave differently when you try to clean them up. You can grab the source code from:

There’s Nothing Wrong With Failing

ProjectXyz: Why I Started A Team For My Hobby Project

Example: Getting Data Back From An EventHandler